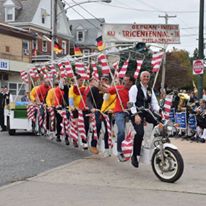 This unique 36-foot long, 12 seat bike was sent from Krefeld, Germany to participate in the 1983 Philadelphia Steuben Parade and Tercentennial Celebration. Known as the "Caprifischer" and ridden by 12 Krefelders, this bike was such an overwhelming attraction and success that efforts were made to keep it here in Philadelphia. This happy group known as the "German - American Tercentennial Bikers" peddled the bike for many years in the Steuben Parade as well as many other parades in the Philadelphia area. The Bike has also appeared in the Steuben Parade in New York.

The Bike was later acquired by the Steuben Day Observance Association of Philadelphia & Vicinity. Today it is managed and maintained under the direction of Fred Gauss. The Bike can be seen participating in the Steuben Parade as well as in several other local parades and celebrations, including the Philadelphia Thanksgiving Day Celebration, and the Rockledge Borough 4th of July Parade. Today's "Bikers" are primarily members and friends of the Vereinigung Donauschwaben. They continue the traditions of the original "Caprifischer" and the men from Krefeld.

This historic bike is indeed a special mechanical piece. It involves continuous maintenance and care, In 2015, a dedicated supporter of the German - American community, Irmgard Martino made a sizeable contribution to ensure that this bike can be serviced and maintained for the future.

Please see a member of the Executive Committee if you are interested in helping the maintaining this unique bike!